The following are “snapshots” of Black and White Catholicism, thinking about the Sexual Revolution in the United States

Recent events led me to look for statistics about “fatherlessness” in black families. This data is not specific to Catholics, but it was the first set of statistics I started with in relation to the topic. Without further comment I will immediately shoot out the numbers I found. Here is what “black fatherlessness” looks like in America.

There is this article saying “slightly more than half [50%] of black children live in homes headed by one parent—which is usually, but not always, the mother”

There is this article, which gives a more exact figure, claiming “only 44% of black children have a father in the home.”

In perspective with these (note well!), if you see or hear the claim that 70% of black children now are living without their father, it is false. The claim is a conflagration of the data about “fatherlessness” with the number of black children who are born of unmarried parents, the latter figure is about 70% (for example, see here). Of course, black children may grow up with their fathers present in the home even though their father and mother aren’t married, just cohabitating. Even if a black father is not in the same house, he might be close by and even daily present in the lives of his children. Lastly there are some black fathers who are single parents.

Comment: As a Catholic priest I positively affirm that the ideal for children is to grow up in a household where their father and mother are committed to each other in a marriage covenant. I take the side of the Judeo-Christian ethic of sexuality, of which we can speak more later. The initial point is that I see the statistics above as a bad thing for black families. This is even after clarifying the false claim (i.e. the 70% black fatherlessness); even though it is not that bad, it is still bad.

Let us put the above statistics for black families in their historical perspective.

From 1890 to 1950, black women had a higher marriage rate than white women. And in 1950, just 9% of black children lived without their father. By 1960, the black marriage rate had declined but remained close to the white marriage rate. In other words, despite open racism and widespread poverty, strong black families used to be the norm.

What happened? I don’t know for sure, but this data looks like the African American family, in its poverty, got pretty messed up throughout the  unfolding of the American Sexual Revolution.

Here I only introduce the consideration of the “the church” as that loose-and-splintered compilation of American Christianity.

From the Black Demographics website, we find this terse summary of black religion in America:

Many scholars estimate that 15-30% of Africans imported as slaves were Muslim. The majority of the remaining practiced indigenous forms of worship. All were converted to Christianity. Most became Baptist although slaves from Louisiana became Catholic because of the French settlers in that area. Today 83% of African Americans are Christian, and only 1% identify themselves as Muslim.
(https://blackdemographics.com/culture/religion/)

This has left me with many questions. How did this state of things come about? Is it, as has been insinuated, that black men have not taken responsibility? Were they equally guilty as white men in rejecting sexual responsibility, but just failed to get equal access to the “conveniences” of modern birth control? Did each generation of African Americans, men and women together, reject Christian sexual ethics because they had felt so oppressed by white Christians? Was the fault only with black Christians, who did not listen to the clear moral guidance of their churches? Were Christian leaders in the right, and black peoples in the wrong? How much and in what ways did the church speak to blacks? Did the church do its job? Who was and was not living the authentic love of God and neighbor?

I don’t have the full story of course. Historians of Baptist churches in American would be in the best place to answer these questions. I don’t like the final results for the 80% Christian -including 45% Baptist and 5% Catholic- Black population in America, but I don’t know whether I can judge too harshly against any religious heritage other than my own.

There is this rich article from the Smithsonian Magazine on the history of black Catholics (author Matthew J. Cressler). I will quote four paragraphs, which give a stark comparison.

The story of how Roman Catholics “became American” is very well-known. Beginning in the 19th century, Catholics were a feared and despised immigrant population that Protestants imagined to be inimical to, even incompatible with, everything America was meant to be. American mobs burned Catholic convents and churches. By the early 20th century, the anti-Catholic Ku Klux Klan was running rampant.

But this changed after the Second World War. Military service, educational achievement, economic advancement, and suburbanization combined to make Catholics virtually (or, at the very least, statistically) indistinguishable from other Americans. Catholics became “mainstream.” The culmination of Catholic Americanization arrived, symbolically, with the election of President John Fitzgerald Kennedy in 1960,

Just two weeks later, on April 16, Father Herman Porter, a black priest from Rockford, Illinois, convened the first meeting of the Black Catholic Clergy Caucus in Detroit. Fifty-eight black priests gathered with at least one Brother and woman religious (or “Sister”) to draft the statement that inaugurated a national Black Catholic Movement. Its provocative opening words were: “The Catholic Church in the United States, primarily a white racist institution, has addressed itself primarily to white society and is definitely a part of that society.”

Firstly, the Catholic Church, as that eternal “Communion of Saints” to which we adhere in the Creed, is most certainly not a “white racist institution.” But as for the general sanctity, on earth, of that communion, each Catholic’s share in it is not so easily presumed, in the U.S. or anywhere. Further, I don’t actually think that systematic racism is the worst sin on the list of American Catholics’ iniquities. But racism surely has been prevalent enough to make a “top ten” list for the numerous sins of omission and commission of American Catholics.

As for what those other sins might be, we have the 20/20 hindsight for our “virtue-vision” now. And I will be rather explicit. Between 1950 and 2000, here are some of the things that happened in the Catholic Church in America. There was a proliferation of internal dissent against the Church’s doctrines regarding marriage, sex, contraception, and chastity; there was the abuse of children by priests who were constantly covered-for by their bishops, some of whom themselves had abused children and were only solicitous to sweep the sordid affairs of priests under the rug; there was a notable presence of homosexual/homoerotic behaviors between seminarians, between priests, and in cases like then Fr. Theodore McCarrick, by priests imposing themselves upon seminarians; and if we are talking not only about sexual immorality, there was this, the abandonment of Catholic Scripture-and-Tradition doctrine by too many priests (who may or may not have bothered to use Catholic social teaching as a misguided “replacement” for a real belief in Jesus Christ); there was a slow but continuous falling away within each generation of Catholic families, firstly in Catholic marriage numbers, then in Catholic confirmation numbers, and now in Catholic baptism numbers.

In the end, it is hard to say that the “Americanization” of the so-called “white Catholic Church” in the 20th century has helped the sanctification of the Church. If we have any convictions that “black Catholics should matter” to the Church, then a parallel or extended “Americanization” of black Catholics, without holiness, is no good way to proceed.

From this 2015 CARA study about US Catholic Families, in the wake of the sexual revolution, this doesn’t look all that bad for Catholic “fatherlessness” in general: 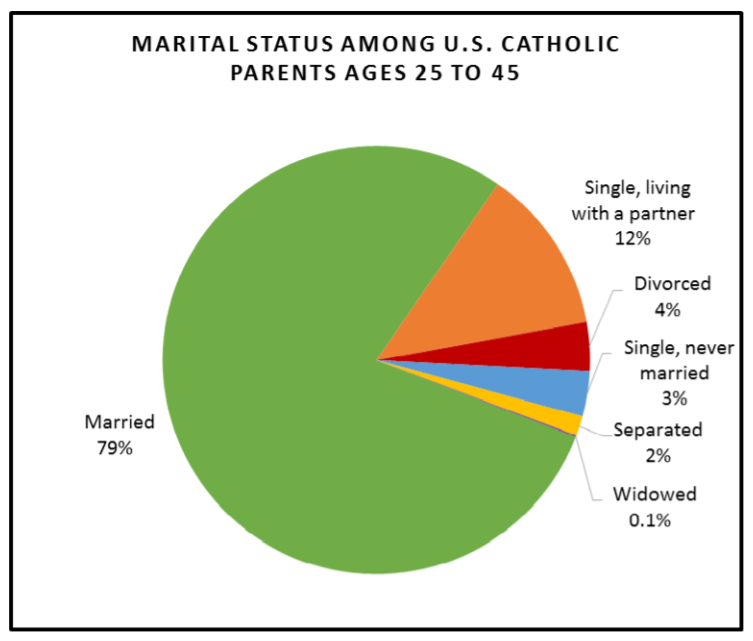 But if we look at who is more likely to be among the single (i.e. likely fatherless, or just cohabitating) Catholics, then it looks like this:

I’m certain that the failures of the Catholic Church to respond quickly, adequately, and integrally to the sexual revolution, and to its own internal corruptions, certainly hurt everyone. And I’m thinking that black American Catholics might be a significant part of that “everyone.”